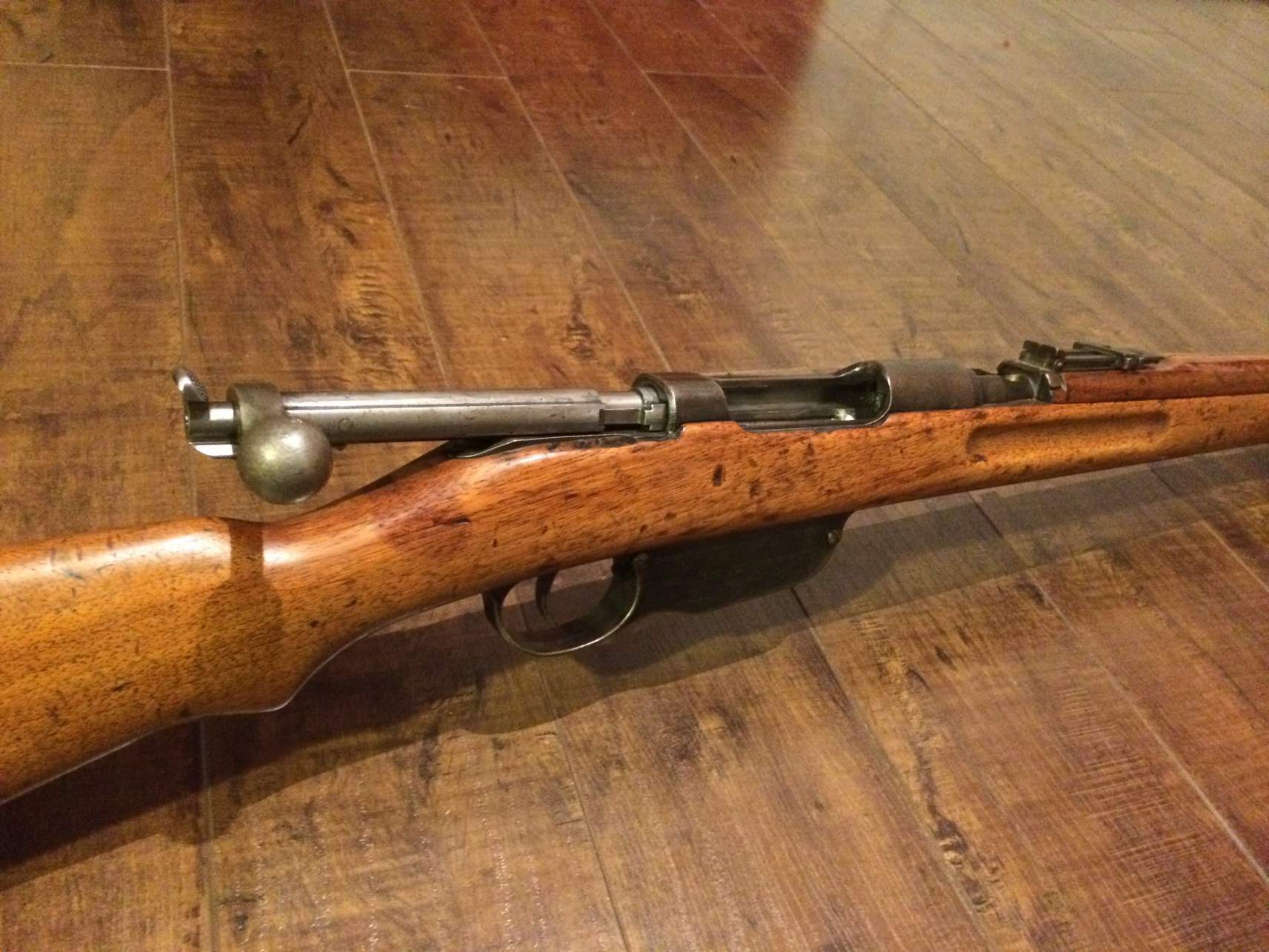 M95 Steyr Rifle Serial Number Lookup Night sights edit A set of rear and front Luminous Sights M.1916. A number of Model 1916 night (Luminous) sights were issued during World War I. 16 The rear night sight is a small brass plate that is placed underneath the rear sight leaf. The front sight clamps around the rifle's front sight base. Steyr Arms USA 2530 Morgan Road Bessemer, AL 35022 P: (205) 417-8644 F: (205) 417-8647 Steyr Arms EU Steyr International. Weebly questions and answers. WARNING This product can expose you to methanol, which is known to the State of California to cause cancer and birth defects or other reproductive harm. For more information go to www.P65Warnings.ca.gov.

The M95/30 was a conversion in the First Austrian Republic by Steyr-Mannlicher during 1930–1940. These rifles carry the letter S meaning Spitzer stamped on the barrel. Main modification was the rechambering to 8×56mmR cartridge. Many of the designs that are found on todays rifles we owe to Mannlicher. Mannlicher died in 1903 leaving behind a legacy that maybe only Browning can compete with. The Steyr Model 1895 is the result of several design changes. The first design straight pull bolt was in 1884, the M84, with gravity fed magazine, designed by Mannlicher.

by RK Smith with additions by Cliff Carlisle 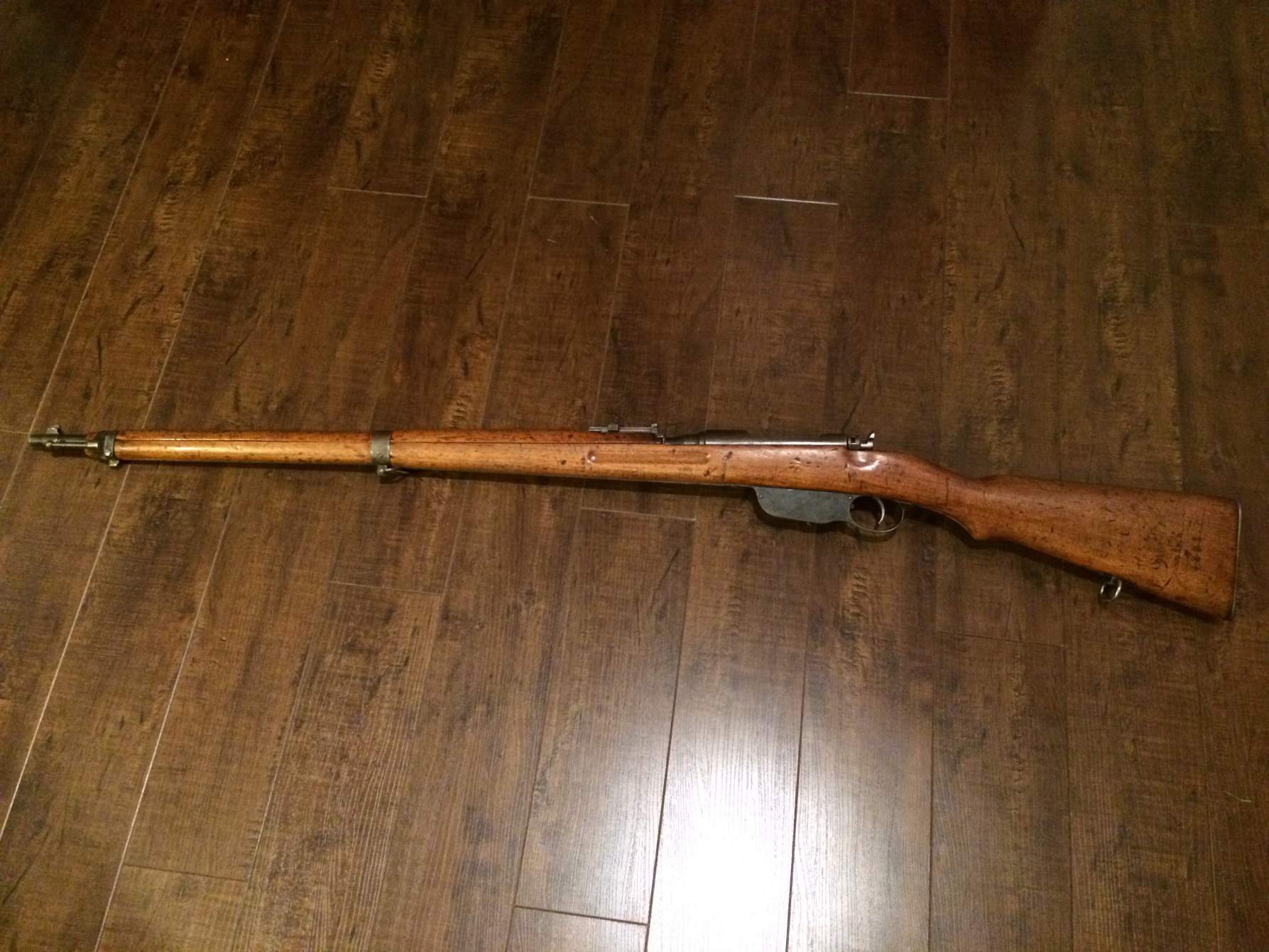 Ferdinand Ritter von Mannlicher was born in Austria and was a mechanical genius, giving to the world over 150 different weapon designs. There are Austrian, Belgian, Dutch, French, German, Italian and Serbian Rifles that used his Mannlicher clip as well as the Garand made by the USA and several other countries. Many of the designs that are found on todays rifles we owe to Mannlicher. Mannlicher died in 1903 leaving behind a legacy that maybe only Browning can compete with.

The Steyr Model 1895 is the result of several design changes. The first design straight pull bolt was in 1884, the M84, with gravity fed magazine, designed by Mannlicher. The first improvement was in 1885 with the addition of a clip fed magazine in which the clip was ejected from the top when empty. In 1896 the enbloc Mannlicher magazine holding five rounds was added to the gun and it was designated the M86. Two years later, 1888, it was changed from the original 11mm to the 8X50R which was black powder charged. In 1890 it was changed, M1888/90, to smokeless powder, with an altered sight to compensate for the difference in trajectory. Later that year a new design was introduced to better handle the increased pressures of the round. This design was known as the Repetier- Carabiner M90 and had the locking lugs at the forward end of the bolt where they would give more support to the head of the cartridge. The M90 is 39.5 inches long with a barrel length of 19.5 inches. The weight is 7 lbs. 2 ounces. The stock has no hand guard and is held by one barrel band at the forend. The final design was the Repetier Gerwehr M95, which only had minor modifications, but is considered to be very strong. The M95 was manufactured in three configurations: The 50' infantry rifle; The 40 inch 7 lb 14 oz short rifle( Repetier Stutzen- stutzen means support in German) to be used by the signal, artillery, and engineers, with stacking hook, bayonet lug and the sling swivels on the bottom of the stock. The 39.5 inch, 7 lb 2 oz cavalry carbine, without stacking hook, and bayonet lug, with sling swivels on the left side of the stock, to be carried in a saddle boot. The front sling swivel, on the carbine is located 2 1/8 inches further back on the stock than on the Stutzen. The M95 was first manufactured at the Steyr plant, marked STEYR M95 and then in Budapest at an arsenal set up on an island by Steyr, marked with BUDAPEST M95. These two plants also manufactured the M95 for Bulgaria, marked with the Bulgarian Lion Crest. At the closing of WWI the Imperial Austro-Hungarian Empire collapsed and the armaments were dispersed as war reparations to Greece, Italy, Hungary, Bulgaria and Yugoslavia. Greece, Bulgaria, and Yugoslavia reworked the M95's and rebarreled them in 7.92 Mauser. They also altered the magazine to accept the German stripper clips. Bulgaria and Greece designated their rifle the M95/24, Yugoslavia designated theirs by adding an M for Mauser(M95M). These short rifles had a 23 inch barrel, a Mauser tangent rear sight and a mauser front sight. Rifle stocks were shortened to accommodate the shorter barrel, although I have seen two with carbine stocks used. The M95/24 was converted in Belgium for Greece and Bulgaria while the M95M was converted in Serbia to match their FN 24's along about 1928 when their factory for M24's was being built. Other arms were also converted including the Carcano the MN91 and a couple of the Enfield models. After WWI an arms plant was set up in an old Imperial Army Arsenal in Brno Czechoslovakia, and by April, 1919 they were making M95's marked CS. ST. ZBROJOVKA BRNO. These M95's appear to be the rarest of the four manufactured. The Italian M95 was issued in the Italian Colonies to some Colonial native auxiliaries. Photo November 1935 in Eithiopia during invasion shows a Dubat ( a Somali tribesman member of an Italian Somailand border force of irregular guards being used as scouts, flank security to march columns, battlefield pursuit and clean-up. He is carrying an M95 in 8X50 as Italy did not change the caliber of their guns.

In 1930 the Austrian government updated most of their rifles, stutzens and carbines. They were re-chambered for the more powerful 8X56R cartridge & the sights were changed from the old “schritten” measurement (one schritt = 0.75 meter or 29.5 inches) to the metric one and a front sight hood was installed.

Front sight without the hood. Note that it is considerably higher than the original schritten one. Also shown is the hood with the Austrian Eagle marking.

Schritten rear sight on the left & the new metric sight on the right. From an Austrian manual and examples of the guns.

The receivers and sight hoods were stamped with the Eagle stamp for the Republik Austria which was used from 1918 until March 1938 when the Germans took over the control of Austria. The barrels were stamped with an HV (Heeresverwaltung = army administration) control stamp where the right leg of the H is the left leg of the V, the Austrian republic eagle and the date of the conversion. This one is stamped HV eagle 34 for 1934.

They marked the updated ones with an S on the barrel and designated them the M95/30 or M95 S for Stutzenkarabiner. The barrels were originally marked Wn, Imperial Eagle and the date of manufacture. During the upgrade some of the dates were over stamped and some were left intact with the HV stamp alongside the original one.

After the Germans took control of Austria in 1938 they re-called all the M95s & replaced them with German rifles. The M95/30s were processed through a repair shop & the sights were changed back to the schritten type and the front sight protectors were removed. These guns were then given to the Bulgarians, one of Germany's allies, who still used the M95 with the schritten sights. An un-converted M95/30 is a rare gun.

An Austrian Federal Army (Bundesheer) soldier with one of the M95/30 Stutzenkarabiners.

In 1931 Hungary also re-chambered their Stutzens to 8X56R and installed a front sight hood. The hood, however, is different than the Austrian one. They stamped the barrel with an H to signify the caliber change. Hungary designated the converted rifle the Huzagol 31M.

There are many other variations including the 95/34 (although this is not an official designation)that has a sling loop on the left side of the forearm instead of the sling swivel and an Austrian Police version with an aluminum butt plate from the 50's. Another variation is the Stutzen Navy model with sling attachments on both the bottom and left side.

The M95 saw use in two World Wars and many other small wars. M95 carbines were issued to the Russian Navy as the standard arm, but I do not know if they were marked in any way. It was basically retired in the 50's and has been showing up in the USA for the past few years as a collectors item. The M95's coming out of Century Arms at this time all have stacking hooks while some of them have stocks that belong on a Stutzen, some of them have carbine stocks. All of the guns I have obtained are 40 inches overall (Stutzen length) with one or the other stock, indicating to me that the use for a cavalry carbine had dwindled to nothing with the advent of the mechanized army and the use for a bayonet on a short rifle for the infantry had increased. There is additional information pertaining to the M95, as it relates to the individual countries discussed, on our various rifle history pages.

Mannlicher was a very prolific designer and has several other Carbines to his credit which I will cover at a later date on another page. Check the Serb Yugo page for additional information on the M95's