The New King (late prewar and postwar, informally grouped into Series I, II, III, IV, and V, base for stencils) Toneking (deluxe models produced concurrently with New King) Most of these historical models were also available with different 'packages,' such as 'EX' ('Exklusiv') with more elaborate engraving, additional keywork, additional mother. Keilwerth The New King Tenor Saxophone. Made in Germany, stamped 'The Best In The World' Serial Number: 2386x Rolled Tone Holes. Good plating but has some blemishes on the upper part of the body. Pads are very good. Nice, clean carrying case. To this end, Keilwerth designed new versions of his Toneking and New King horns and stenciled this design to a bunch of different companies in a move that compares very favorably to the stencil craze of the American saxophone market from 1915 to 1929.

The New King Alto #21971 Source: eBay.de. I have tried to find serial number charts for Keilwerth saxophones on a number of occasions. Usually my attempts have netted me partial listings at best. More often than not there are years missing out of the chart, so its always a best guess.

The Julius Keilwerth company is a German saxophone manufacturer, established in 1925.

Julius Keilwerth first apprenticed for the Kohlert company in Graslitz, Czechoslovakia. After this apprenticeship, Julius Keilwerth and his brother, Max, established a workshop in their home around 1925 or 1926. They primarily manufactured saxophones for Adler and FX Hüller. The Julius Keilwerth company became one of the largest saxophone manufacturers in Europe by the start of WWII, with approximately 150 workers. After World War II, the company relocated to its present headquarters at Nauheim, Germany.

In 1948, the old Julius Keilwerth production facilities in Graslitz, now Kraslice, became part of the Czech Amati collective, however the first saxophones that Amati sold were still stamped with the 'JGK - Best in the World' trademark, had the model name 'Toneking' and had Julius Keilwerth serial numbers.

Most of these historical models were also available with different 'packages,' such as 'EX' ('Exklusiv') with more elaborate engraving, additional keywork, additional mother-of-pearl inlay, or drawn and rolled tone holes.

Julius Keilwerth also produced a limited quantity of a trumpet called the 'Toneking 3000.' There may have been other brief forays into making other woodwinds or brasswinds, but no records are available as of this writing (February 2012).

'Vedette' alto Saxophone - a 'stencil' of the 'New King' Series IV made by Keilwerth circa 1968. Has straight tone-holes (not rolled) and is in two-tone finish i.e. nickel-plated keys on a lacquered body

Some of the best known of the Keilwerth stencils are those made for the W. T. Armstrong Company:-

Note: later H. Couf models, like the 3200 and Royalist II were made by the United Musical Instruments, not the Julius Keilwerth company.

Note: some saxophones (e.g., Voss, Roxy, Senator, and De Villiers etc.) that appear to have been made by Keilwerth were in fact manufactured by another German company called Dörfler & Jörka (also based in Nauheim) between 1949 and 1968. The design and location of the neck screw (which is completely different to the type used by Keilwerth) is a simple but accurate method of identifying Dörfler & Jörka instruments.

Keilwerth stopped supplying stencil instruments after introduction of the Modell Peter Ponzol in the mid-to-late 1980s. 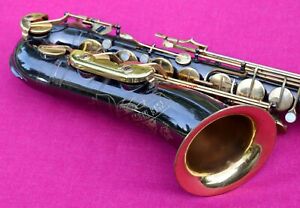 The instrument is characterized by the particular embodiment of the key guard of the low tones, in plexigass, in the shape of wings. Moreover, the instrument have the rolled tone holes, such as that of Conn. This characteristic was maintained even today on the instruments of actual production.

The instrument plays really good, with a great sound very spontaneous and tuned on all registers. The mechanics are really easy and ergonomics. Instrument certainly professional.

Supplied with the original hard case in very good condition.