The inFamous series is one of the better PlayStation exclusive series that started out on the PlayStation 3. Today I am going back to where it all started with the first game that was released over a decade ago as I write this! Since then we have had two sequels and a side game so it has become quite the little franchise for Sony and Sucker Punch.

I Was Just Trying To Do My Job

At its heart, inFamous is a superhero origin story and as it is not tied to a Marvel or DC property. The people at Sucker Punch were able to really cut loose and come up with their own take on the superhero genre. inFamous stars a man called Cole who is a bike messenger. One day in Empire City, Cole is transporting something that explodes, causes massive damage to the city, and leaves him in a coma. 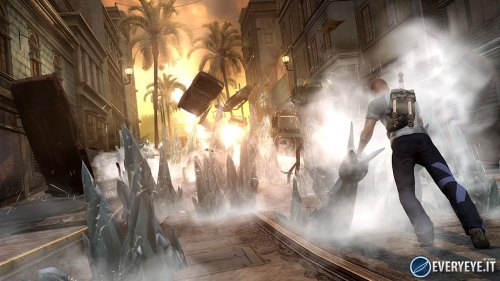 When he wakes up the city is in ruins with three gangs fighting for control and people who are stuck in a quarantine zone due to the explosion…. Oh, Cole has now also developed superpowers as he can use lightning! The story is great and told with these really well-done comic book style scenes. It is so good that I am surprised Hollywood has not come knocking to turn this into a movie yet!

Be The Hero You Want To Be

At its core, I would say that inFamous is an open-world superhero game. Playing as Cole you get to do a ton of story missions, but there is also a lot of side missions and random stuff that you can do as well. The game has a morality system in place where you can make Cole be the kind of hero you want him to be. You have a meter that will either be blue for a hero or red for evil.

The meter will change depending on how you play the game. For example, if you execute a bad guy instead of just restraining him that is bad. If you murder a bunch of people so those that you love can get all the food, that is bad! The main story also has some tough choices for you to make as well. I really enjoyed this aspect of the game and I have played through as a hero and as a bad dude! 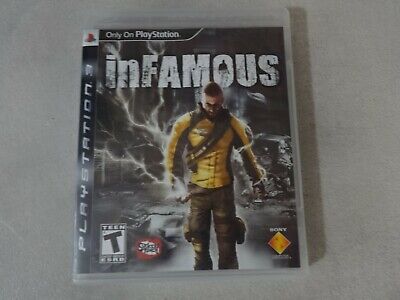 Who Needs The Avengers?

Playing as Cole in inFamous is a great deal of fun. He moves around at a quick pace and he can even use his powers to fly and grind on tracks. He can climb, wall run, and get around the city in many cool ways. This makes exploration even more fun than it usually is in a game like this. As you progress you will learn new ways to use your electricity powers such as shooting electricity grenades or calling down lightning. Your abilities can be upgraded as you play so there is a fantastic sense of progression all the way until the end of the game.

PlayStations Finest, PS3 That is

At the time of release, this was one of the best looking games on the system and I do feel that it holds up fairly well to this day. You do have to take into account that this game is over a decade old at this point so it does show its age in a few places. The game has no load times, but when you are moving from one part of the city to another really quickly, it can have a bit of pop in or frame rate stutters. Still, this is one fine looking PlayStation 3 game.

I have enjoyed my time with the entire inFamous series and I think that Sucker Punch really nailed it with this first game. Download xsplit license keygen learning. Cole is a great character and as someone who loves comic books and superhero movies, I found the story they told to be engaging, thought-provoking, and just a whole lot of fun. This is one of the better PlayStation exclusives to be created over the last generation or two and I highly recommend you check this out. 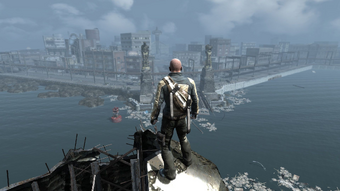 InFamous PC DownloadGame is a direct link for windows and torrent GOG.Ocean of games InFamous igg games com is an awesome game free to play.Play this awesome game for free and share this website with your friends.

Are you a game lover? If yes the you will love this awesome game.This game is also available for Android, iPhone ,XBOX ,PS4.We will provide you a highly compressed link for this game so you can download easily .It’s a virus free game feel free to download.You can download this game from Mega,Google Drive or Torrent.If you don’t know how to download this awesome game from Mega,Don’t worry we have made a tutorial for you .If you If you don’t know how to download From Mega Clickhere

Infamous is an activity enterprise and open world computer game where the player controls Cole and fundamentally cooperates with the universe of Empire City through Cole’s recently picked up power based forces; these are utilized for development, offense and barrier in battle, and either regardless in managing the subjects of Empire City. With the end goal Cole should utilize his forces, he probably put away electrical force, spoke to by a hub meter on the player’s heads up presentation (HUD).

he player can energize Cole by emptying power out of controlled sources or from living creatures; reviving likewise reestablishes Cole’s wellbeing, however in the event that the player stays out of fight sufficiently long, Cole’s wellbeing will recover after some time. The diversion highlights seventeen distinctive electrical forces, extending from straightforward jolts that don’t devour Cole’s vitality to wide-handle lightning storms that deplete a large portion of Cole’s vitality. The player can utilize such powers, giving the player alternatives in specific circumstances. For instance, the player may fire at a generator close adversaries to make it blast and disabled person his rivals, then control them or flame at the body to slaughter the adversary.