New in V7.4:
– Automatical recognition of swapped files in dump tool. In the most cases the no need to flip bytes manually
– Added support for unsupported till now subtype of Simos7.1 engine control units – Login (PIN) and component security are now available

New in V7.8:
– Added support for almost all VDO instrument SW versions present on VW/Seat/Skoda after 2007+
– Added functionality to read the EEPROM/RAM/FLASH for the VDO instruments after 2007+

– for all other modules (i.e. except these which can be made by OBDII – airbag, dashboard, EZS-Kessy and comfort module) in A6/Q7/Allroad 2003-2012 and A4/A5/Q5 2007+
is possible to adjust the component protection if you have two Gateway EEPROM dumps: dump from the car where you will build the module, and dump from the car from which the module is taked.

– for A6/Q7/Allraod 2008+ possible to adjust the component protection for dashboard using EEPROM dump of the Gateway unit
(i.e. not needed to have Gateway EEPROM dump from the car from which you take the dashboard)

– for A4/A5/Q5 2007+ possible to adjust the component protection for dashboard using EEPROM dump of the Gateway unit
(i.e. not needed to have Gateway EEPROM dump from the car from which you take the dashboard)

New in V16.0
1. Component protection for dashboard from Audi A6/Q7/Allroad 2008+ added
2. New special function AN037 implemented – “ECU adaptation by OBDII”.
The special function is available for all engine control units which are
not supporting channel 50 adaptation. This includes EDC16, EDC17, MED9, MED17, Simos benzin, Simos PPD (diesel),
even some ME7 (e.g. 7.5.30) are adapted in that way.
For virgin ECUs it is not necessary to have anything, for used (second-hand) ECUs for the adaptation is needed
to have the old CS and PIN of the engine control unit.
The old CS in this case can be retried in two way:
– for EDC16, MED9, Simos PPD, ME7 is retrieved by OBDII
– for all other cases (e.g. EDC17, MED17) it can be retrieved from the immobilizer of the car where the ECU was originally build

The adaptation of the ECU makes possible following:
– view power class of the ECU. Power class is fixed in ECU flash and only engine control units with same power class can be replaced.
If power class is not equal of both ECUs, it is possible to change power class in immobilizer.
– change component security (CS)
– change PIN
– change MAC (MAC is automatically synchronized after the adaptation is made)
– change Immo number
– change vehicle identification number
3. ECU Simos 7.1 – Read PIN/CS/MAC added.
4. Key Learning Special Function – “Standard Mode” (as till V15.0) and “Wizard Mode” (from V16.0) separated.

New in V16.1
1. AN038 implemented – BCM2 A4/A5/Q5 2007+ key-learning
The special function makes possible to learn keys for A4/A5/Q5 2007+ vehicles with the BCM2 immobilizer.
To make a key you need to read the BCM2 dump. This is possible with the ABPROG (ZN030) programmer. The ABPROG programmer
is integrated into the ABRITES Commander for VAG, wiring diagram is also available in
the ABRITES Commander for VAG folder.
After the BCM2 dump is read, you can make a dealer keys for this car. The used transponder should be Hitag2-Extended.
The user has also the possibility to learn from 1 to 8 keys.

New in V21.0
1. EDC17/MED17 immobilizer bypass by EEPROM dump
2. Added adaptation of Immo V engine control unit and BCM2 modules.
3. Change mileage in EDC17/MED17 (if mileage is available in the engine control unit)
4. Transfer PIN/CS/MAC from one EDC17/MED17 to another using flash/EEPROM dumps
5. Fix the checksums in EDC17/MED17 flash
6. Support for Seat Exeo with RB8 dashboard added – both for mileage and keys
7. Added support for Audi A6 2.4L MPI 2004-2008
8. MMI3G component protection added for A4/A5/Q5

New in V25.0
1. Added functionality for reading of the Simos PCR 2.1 engine control units. The PIN/CS/MAC are read for these engine control units (ECUs).
It is necessary first to unlock the ECU from the EEPROM (read EEPROM with a programmer, then software generates UNLOCK dump, which have to be written with a programmer)
Once the ECU is unlocked it is possible to read the PIN/CS/MAC of the ECU by OBDII. This data can be used for replacement of defective engine control unit,
or for making keys for a car where all keys are lost.
2. TCU adaptation for A4/A5/Q5 2008+, A6/A7/A8/Touareg 2010+. This will synchronize the transmission control unit (TCU) with the immobilizer, and will allow to shift the gears.
First it is necessary to read the new (replacement) TCU on the table by direct connection to the TCU connector. Once the TCU is read,
it can be adapted to the car completely by OBDII.

New in V25.1
1. Added new software versions of the vehicles with BCM2 for key programming by OBDII 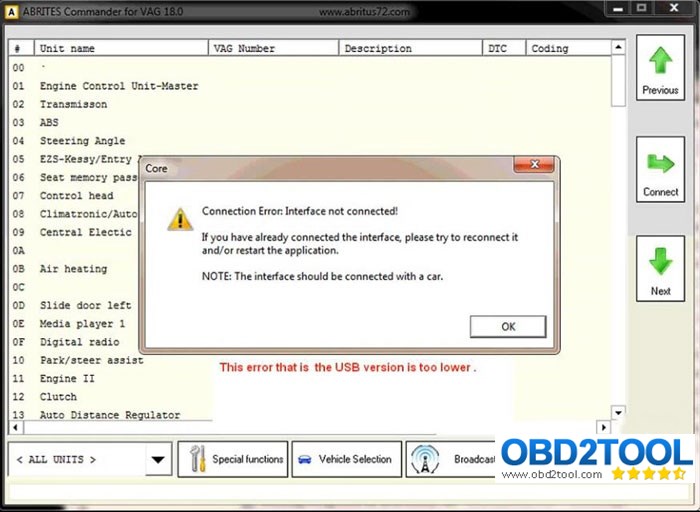 New in V27.6
1. Added dashboards Magneti Marelli UDS by OBDII.
2. Added possibility to make Magneti Marelli UDS dashboards by dump (EEPROM and flash – NEC V850)
3. Immo V vehicles with BCM2 (A4/A5/Q5 2008+ and A6/A7/A8/Touareg 2010+) – automatic synchronization of the ID in all modules (including ELV)
4. Added possiblity to replace the dashboard and infotainment module for A6/A7/A8/Touareg 2010+ (if old module is available by OBDII)

New in V28.0
1. Integration of the distribution box for reading/writing of EDC17/MED17 by boot mode.
2. EDC17/MED17 mileage correction through boot mode – requires the distribution box
3. Reading of EDC17C64 is now possible (PFlash/DFlash, i.e. flash and EEPROM) – requires the distribution box
4. Added support for component protection for A6/Q7 CD Changer (Panasonic non-MP3)
5. Added support for Component protection for 09-Central electric module for A4/A5/Q5 (8K0/8T0)
6. VW UP 2015/2016/2017 – reading the CS and key programming is now possible
7. A6/A7/A8 all keys lost possibility to learn keys when there is no electronic steering lock (ELV)
8. Possibility to adapt A4/A5/Q5/A6/A7/A8 transmission (TCU) from the BCM2 and key dump (from the car from where the replacement transmission is taken)

New in V29.0
– Immo III/IV emulation – allows to build immo-related parts in other vehicle, even when the brand is different or power class is differetn.
Works for the transmissions of Audi A6 2003-2010, Audi Q7 2005-2015, Audi A8 2003-2010,
and for all Immo III/IV engine control units (EDC16/EDC17/ME7/MED9/MED17/Simos benzin/Simos PPD/Simos PCR/Magneti Marelli/Delphi).
Requires additional Immobilizer emulator and distribution box.

New in V30.0
– Added possibility to learn keys for ALL Immo III and Immo IV cars with Megamos48 transponder (both 7 and 12 bytes CS).
Requires distribution box with connection to the OBDII, connection to the powertrain CAN bus (where Engine Control Unit
and ABS are connected), and special M48 sniff transponder.
– Added dashboards VDO NEC 2014-2016 (both for mileage and keylearning)
– Added dashboards Audi A3/TT/R8 till 2010 with CDC32x – both for mileage and key-learning)
– EZS-Kessy A6/Q7 with VAG number “4F0910852B” and SW version 0210 and higher is now supported for reading when a working key is present.
– Added dashboard MM9 with TP2.0 for mileage (build in some Golf 5 cars)
– Install/Remove a device from Gateway Installation list.
– Improved autoscan and ClearDTCs via Gateway list
– Immo 3/4 Emulator reflash (update of the firmware)
– Make a dealer key from Comfort module dump on Passat B6 using TA26 (when all keys are lost)
– Read and write of EEPROM and FLASH by boot pin for ME17.5.24 (TC1724) and ME17.5.6 (TC1767)
– Change mileage of MED17.5.5

New in V37.2
– Some fixes for the MQB dealer key preparation

Note: Does not support online functions

Here is a collection of problem solutions for SVCI 2020 and SVCI 2019 users. hoping it is helpful to you!

Problem: When I opened the Abrites commender BMW v10.4/v10.5 software with FVDI 2020 device to read DTC functions, an error prompt appeared “Missing DTC database. Install the ABRITUS Common setup” as below in the figure.

Solution: This issue may also exist at SVCI 2019. You can solve it through the following steps.

2.Could not determine coding file name

Problem: When you want to program the radio eg function with BMW software with SVCI 2020 or SVCI 2019, it will appear the error information as shown below.

Solution: For this error, you also can use the same solution as “BMW DTC database missing” above.

3. mfc110u.dll or others dll files missing

Problem: When I installed SVCI 2020 (SVCI 2019) software and run it, I got trouble in system error, it prompted “The code execution cannot proceed because mfc110u.dll was not found. Reinstalling the program may fix this problem.”

Solution: The reason is thatSVCI2020 or SVCI 2019 software some dll files are killed by anti-virus software or some operations are suddenly interrupted during installation.

Here is the method to solve it:

1.Make sure the anti-virus was uninstalled, and then reinstall SVCI2020 or SVCI2019 software or install patch files.

2.Go to patch folder directory( C:Program Files (x86)Abrites Commander Software ListPatch). as show in the figure below, and then install these application.

Problem: When I installed the new version FVDI 2019 on my computer, a message appeared “This option is not available in the current version. License missing.”

Problem: An error message appears on the screen “An error occurred while trying to copy a file” when install SVCI 2020 Abrites Commander software.

Solution: Please download SVCI 2020 software by the following free link, and install it on a Win10 Pro 64bit PC.

Sever: No Need Connect to Server!

Time for use: No Time Limitation!

1.SVCI 2019 and SVCI 2020 cannot be installed in the same computer at the same time. If you have already installed SVCI 2019 software, please uninstall it first.

Here is the related article of SVCI2020 installation for reference:

Problem: The system shows the following error on SVCI 2019 or SVCI 2020 software “Connection Error: Interface not connected! If you have already connected the interface, please try to reconnect it and/ or restart the application.

Note: The interface should be connected with a car.”

Solution: In general，the reason for this error is that the windows system compatible problem.

This problem will not occur if you install FVDI 2019 or FVDI 2020 software in Win10 64bit professional.

The main reason for this error is that the USB driver version is too lower. By default, v2.12.28 version driver will be installed in the system, but this version driver cannot be successfully installed due to system reasons.

Watch this video of how to solve SVCI 2019/2020 connection error clearly: