Claw is a fun but little-known side-scrolling 2D platformer game from Monolith. The Adrenaline Vault's detailed review explains why action fans should take a look:

'Based roughly during the 15th century, Claw takes us to an almost parallel earth where the known world is ruled by the Cocker Spaniard Kingdom. However, instead of playing a human, cyborg, or mushroom like in other popular side-scrolling adventures, you get to play a part in one of the classic rivalries -- cats against dogs!

Your role in this monumental adventure is that of Captain Nathaniel J. Claw, a feline pirate of the seven seas, infamous to all. The King, tired of your exploits, has put a rich bounty on your head of one million gold pieces, dead or alive. The game begins as you attempt escape from your Spanish prison and your search for the gems that power the Nine Lives Amulet, which is reputed to grant immortality to the owner.

Claw is filled with 14 huge levels to play through, with each level progressing you further towards escape and the Nine Lives Amulet. So how big is huge? Well, the first three levels will probably take you twenty minutes each, but once you hit level four, The Dark Woods, expect to spend at least an hour or more. Each level is unique and draws you far deeper into the story than you would ever expect a side-scroller to accomplish, but Claw does so easily. As an example, once you escape from La Roca prison, you fight your way through the Battlements to a showdown with your captor. Once slaying him, which is no easy feat, you escape to the Footpath and then The Dark Woods. As you reach certain points in the game, you'll see animated cutscenes which relate more of the storyline to you. These cutscenes are professionally animated movies when it comes right down to it and their depth rivals some Disney movies I've seen.

One thing I really noticed about Claw was how fluid the animation is throughout the game. Each character and background looks as though it was 'painted' onto the screen. Imagine playing a cool 3D cartoon and you've come fairly close to what Claw is like. The maps contain that cartoon depth, with some of the background extending forward to conceal areas of the map. Plus, each character is drawn with such detail that you could just watch them for a couple of minutes and be entertained by it.

Of course, true to side-scroller style, there are objects to be picked up throughout the game, plus warps to secret levels. The main item you'll pick up, either floating in mid-air or dropped when you slay some enemy is gold. Gold, as you might expect, adds to your point total during the game and how much your score goes up depends on the type of treasure you receive. The most common item is the gold coin, followed by items such as scepters, amulets, and even crowns. There are also special weapons you can pick up like the fire sword, which sends a burst of flaming death across the screen torching all the creatures in its path and special items like invisibility and invulnerability.

Whereas with most games you can only play with eight other people, Claw supports 64 players at the same time when on a LAN or online network! The network play has several cool features as well which include: level racing -- for the best time or score across a level, marathon level racing -- which is similar to level racing but the race can span multiple levels, the ability to use custom maps, and the ability to upload your high score to the Claw website for instant ranking with other players.

Perhaps the only downside to Claw's multiplayer support is that the game was designed to be used exclusively with Engage, which on first glance might make you think this excludes most of the people out there. However, since the game also supports LAN (IPX) games, you will probably be able to play on any online service that supports the IPX protocol for games.

Claw gets a 5 star rating and with good reason, this game is intense and more fun to play than most of the games that have come across my desk in quite some time. Monolith doesn't fail to impress with Claw and are certainly becoming more impressive as a whole than many companies are already. Kudos also have to go out to Takrajimasha, Inc. who helped in Claw's creation by helping to produce such a top-notch game.

All this praise isn't to say Claw is perfect, the game has some annoying 'flaws.' For instance, I felt the game had too few save game locations in it. Claw, like most side-scrollers, will let you continue from locations when you pass a flag on the way should you die and have another life. However, Claw only contains two actual save game locations in each level, so if you die completely, you usually end up having to fight through a hideous amount of territory to get back to where you were before.

In addition, the game doesn't offer up as many extra lives as most games do, and finding extra magic ammo is rare. These few 'flaws' in Claw are enough to make the game incredibly difficult but overall, still addictingly fun to play.'

to get the Captain Claw cutscenes (Win 95 version) to work with rip version, just copy the 'CLAW.FEC' file (after you mount the Claw ISO to image) to main Claw directory then the cutscenes will work but it has the same issues with slowdown but it can be fixed as well.
to get the cutscenes running properly with djVoodoo 2 program, open the voodoo settings on the direct X section, VRAM must be on 16 MB and on the miscellaneous select the 'fast video memory access' to fix the cutscenes slow-down. then the cutscenes will finally run normally, but keep in mind it's not perfect, it does have very small frame stuttering from time to time but they are at least working and watchable.

one of my childhood favorite games, if you download the RIP version, Captain Claw will run very slow and choppy, but there a way to fix this problem. you have to download 'dgVoodoo2' program, extract it from zip file then copy 'dgVoodooCpl.exe', the 'dgVooDoo.conf' and the 3 dll files that's inside the MS file to the main directory where you're claw file is, then open the dgVoodooCpl.exe you can play with the setting, i suggest to turn off the water marker in glide and direct X settings otherwise it's going to be on bottom corner of the screen when you play which is distracting. then it fixes the slow-down and the game will run perfectly fine they way it should have and it's very fun. if you download the ISO version (for the missing cutscenes) you have to mount it to an image (you need download a mounting iso program to make it work) and then copy the movie folder to you're claw directory (RIP version) then you can have access to the cutscenes, but sadly the cutscenes have issues, there not from the superior smooth DVD version but the original Pixely Win 95 version which don't run very well on modern systems, they run a in regular speed but slows-down constantly which is really annoying and needs some work around them or maybe a different source for these such as the claw fan-site which has a lot of options for the game's assets. overall the game does work great on modern system it just needs some work.

why does the game play slow?

your website is soo neat . Beautiful work , and great collection . thanks a lot

I got only stage in game

i love the game. it was my childhood game but i cant run it

Man, I remember always going to my local Library and playing this game. I loved it so much but I could never beat it. Too bad some kid stole the game :( Glad I found it here though, I just typed in the search bar,'Side scrolling game where you play as a cat in a pirate outfit,' Lo and behold here it is. Thank you!!!

I have followed this game since I was a kid and I love it.
Hoping to get the other version

This is the full version with movies?

I played this game a lot.

Holy scrap this was my childhood game!!!!

i miss this sm..i am a gamer
subs to my youtube channel
merculesgamerr094

It is nice game

thank u very much

when Was Released Claw

I had difficulty mounting the ISO, I found that the disk it was copied from had a sector size of 2352 bytes, rather than the standard 2048 bytes.
I'm not sure whether this approach I'm about to explain loses data, but I found that by copying the 2048 bytes that follow after 24 bytes from each sector, produces a file that can be mounted.
Here is the (crude) program I wrote in C, in order to accomplish this: http://codepad.org/7lBixSQl
Hope this is helpful to someone, took me a while to figure it out!

Anyone have a problem with the game freezing after 4-5 minutes?
Runs smoothly with 'legacy mode' and the.. rollback to windows 95 function.
But after 4-5 minutes the game just freezes, sound keeps rolling, sounds like the entire game is rolling, enemies walking and discovering you etc. but picture stuck? 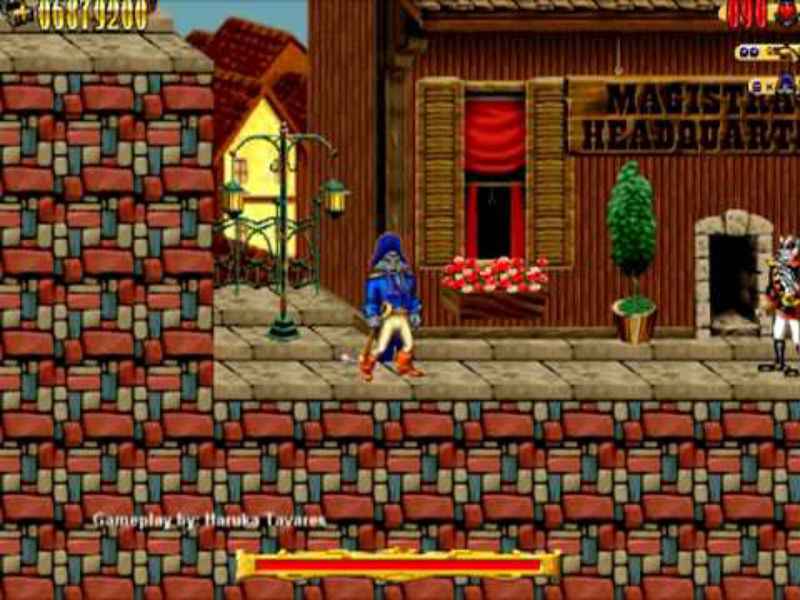 As one of the few who could ever beat 'SPACE ACE' the spin-off from 'DRAGON'S LAIR', you can bet I spent many a tween year in the old-school arcade locations. Many of those stand-up console machines were side-scrollers including little known gems like 'MOON PATROL', 'RASTAN' or 'GOLD MINE'. 'CLAW' leaves all those behind and hits it so out of the park as to SHOOT THE MOON.

For anyone looking for additional information or help with this game, head to http://kapitanpazur.piasta.pl/en/

which one should i download to play the full game? ISO,RIP or patch1.3?

Share your gamer memories, help others to run the game or comment anything you'd like. If you have trouble to run Claw (Windows), read the abandonware guide first!

A small collection of demos, utilities and other odds and ends that exist for Claw.